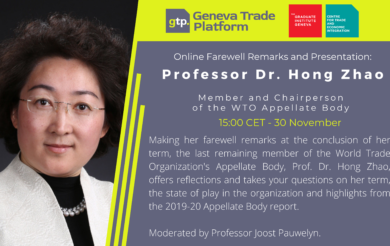 Professor Dr. Hong Zhao is the Chairperson and final Member of the World Trade Organization’s Appellate Body. On Monday 30 November, she joins the Geneva Trade Platform to offer her farewell remarks at the conclusion of her term.

In this talk, moderated by Prof. Joost Pauwelyn, Prof. Dr. Zhao will be reflecting on four years on the Appellate Body, sharing key findings from the newly released Appellate Body Report 2019-20, and discussing the state play in the World Trade Organization.

Ms Zhao received her Degrees of Bachelor, Masters and Ph. D in Law from the Law School of Peking University in China. She currently serves as Vice President of the Chinese Academy of International Trade and Economic Cooperation. Previously she served as Minister Counsellor in charge of legal affairs at China’s mission to the WTO, during which time she served as Chair of the WTO’s Committee on Trade-Related Investment Measures (TRIMs).  Ms Zhao then served as Commissioner for Trade Negotiations at the Chinese Ministry of Commerce’s Department for WTO Affairs, where she participated in a number of important negotiations on international trade, including the Trade Facilitation Agreement negotiations, and negotiations on expansion of the Information Technology Agreement.

Domestically, Ms Zhao helped formulate many important Chinese legislative acts on economic and trade areas adopted since the 1990s and has experience in China’s judiciary system, serving as Juror at the Economic Tribunal of the Second Intermediate Court of Beijing between 1999 and 2004. She has also taught and supervised law students on international economic Law, WTO law and intellectual property rights (IPR) at various universities in China.